Announcing the launch of the manufacturing facilities, G. Soundararajan, Vice- Chairman of the Rs. 1,300 crore annual global turnover company, said the foray into pipes segment was not an adhoc one, but part of an overall business development strategy arising out of their five-year VISION 2020.

Explaining the rationale behind the entry, he said: “As part of VISION 2020, we have fixed on achieving an annual turnover ofRs. 5,000 crore by the end of 2020. To achieve this, we planned to rapidly diversify and add more products to our existing line. Even in an adverse market situation, C.R.I. has grown around 20% compared to the previous year to achieve the highest growth in the organized Indian pump sector in the financial year 2014-15.”

He added that as part of its diversification process, the first product that the company decided on introducing was pipes. C.R.I., with a clear mission to provide a one-stop fluid management solution, would now shift its focus to becoming a provider of an entire pumping system. The contribution of pipes in the total investment of a pumping system is much higher and even more than double that of the pumpset itself.

According to Mr. Soundararajan, in the initial phase C.R.I.is investing about Rs.120 crore in the pipe business. Funding would be through internal accruals and borrowings from financial institutions.

“CRI has a strong marketing network of 4,000 dealers, and nearly 10,000 retailers. Almost all our counters that sell our pumps also sell pipes. This would be to our great advantage from the marketing angle. In addition, C.R.I. also plans to create new distributor channels for promoting the pipes. C.R.I. is a well recognized brand among plumbers, contractors, builders, EPC companies and installers because of its five decades’ long service to the fluid industry. Most of the pipe consumers also acknowledge C.R.I as a quality player in the pumping industry. With this reputation, we can conveniently achieve our targets and become a notable player in the pipe segment,” the Vice-Chairman added.

From an initial manufacturing capacity of 15,000MTA C.R.I. is planning to expand the capacity in the coming years and with the existing established network target around 10% market share in the years to come.

The outlook for pipes is very promising in India. The CAGR of uPVC and CPVC are estimated to be around 15% and 30% respectively. The estimated market potential in India for non-metallic pipes is expected to be around Rs.21,500 crore. uPVC and CPVC pipes alone would contribute to around Rs.9,000 crore, and it is into this niche the company is now venturing in the initial phase.

uPVC pipes are used as riser (column) pipes, casing pipes, plumbing,sewage and drainage pipes. As column pipes,uPVC pipes are used extensively in place of GI and HDPE Pipes for the pumping of ground water in open wells and bore wells. These pipes possess higher tensile strength, UV and chemical resistance and energy efficiency. Further, the pipes have a longer life of upto 25 years and are light weight, maintenance-free and corrosion-free. uPVC column pipes also aid in extracting clear water from bore wells.

As plumbing, sewage and drainage pipes, uPVC pipes are used mainly for the distribution of potable water and disposal of waste water from residential, commercial buildings, and industries. The pipes are non-toxic and lead-free that makes them safe for potable water. The CPVC pipes are used for hot and cold water applications and also high pressure applications. In addition to this, due to their ability to handle up to a temperature of 200 degree F, the pipes are also used for transportation of chemical and hot corrosive fluids in process industries.

The column pipes are provided with patented Polymer Bonded Thread Sink (PBTS) locking system, another innovation from the C.R.I. R&D team. This unique locking system is used as a pipe coupler system to firmly couple the pipes.

The company expects the demand for plumbing, sewage and drainage pipes to increase manifold as the construction and infrastructure industry was deemed to take a giant leap, thanks to the Central Government’s policy initiatives and urban development programmes. An increase in demand for these pipes is anticipated with a quantum jump in the housing sector.

The company hopes that in urban areas these durable and corrosion resistant pipes would come as a solution where water is very hard and people have to frequently spend on steel pipes that rust and corrode quickly.

In the rural sector, the pipes are expected to come as a welcome change to agriculturists, because in the Indian scenario the cultivable area under irrigation is estimated to increase from the present 40 % 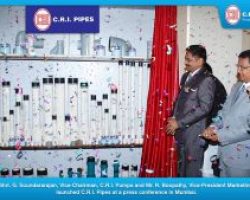 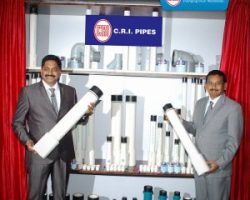 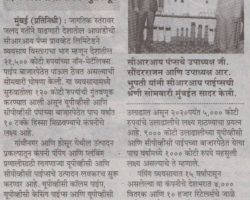 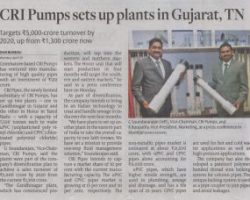 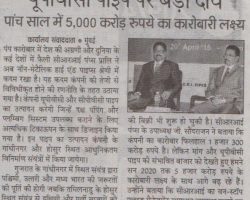 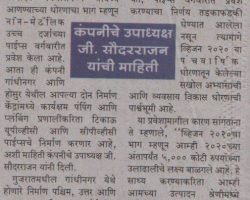