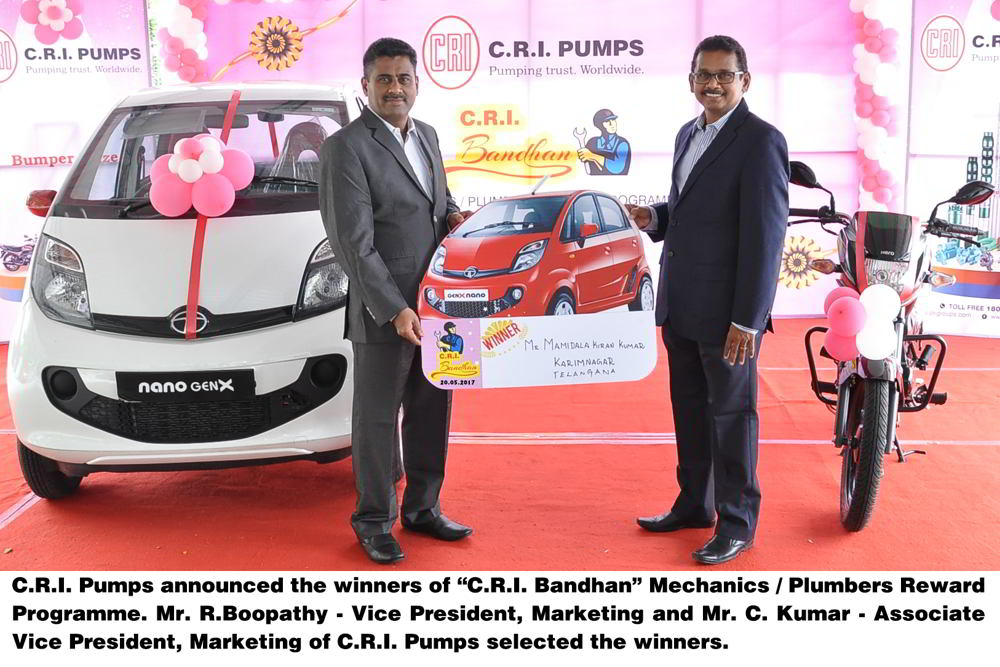 Coimbatore, 20th May 2017: C.R.I Pumps, the world’s fastest growing pump company, had launched an exciting scheme ‘C.R.I. Bandhan’ on 1st September 2016. This scheme was especially launched for mechanics and plumbers who recommended specific C.R.I. products from authorized dealers and retailers to customers. Under this scheme, there were performance award and a lucky draw too. The eligibility criterion for the lucky draw was a minimum score of 15,000 points. The lucky winners of the bumper prizes - a brand new Tata Nano Car and a Hero Passion Pro Bike were announced earlier today at a function at Coimbatore. C.R.I. Pumps has initiated a promotion of this magnitude exclusively for the mechanics / plumbers, spanning such a vast geographical area and more than 5000 mechanics and plumbers participated in this lucky draw. The products that came under this scheme included Monoblock Pumps, Single & Three Phase Open-well Submersible and Bore-well Submersible pump sets.

The mechanics and plumbers who had completed the registration formalities and had obtained a membership card valid from 1st September 2016 to 31st March 2017 were eligible to participate in the scheme. The registration process was open through C.R.I. Authorized dealerships, Toll-free phone number, Portal and Mobile App. Points were allotted and based on the total points earned at the end of the scheme period, members were given prize options to choose from the gift list.. All participants had to submit the scheme card to the respective dealers along with their preferred gift on or before 5th April 2017.

Mr.R.Boopathy, Vice President – Marketing and Mr.C.Kumar, Associate Vice President - Marketing, C.R.I. Pumps, participated in the function held at Coimbatore, Picking the winners of the lucky draw, they said “It is with delight that we acknowledge the diligent patronage of our supply chain and the undying loyalty of our customers - the reasons for C.R.I.’s continued success. The C.R.I. Bandhan Scheme is a value added offering from C.R.I. Pumps in an effort to appreciate all our patrons for their constant support.” They further added, “Congratulations to all the winners of C.R.I. Bandhan Scheme”. C.R.I. is a global player in the pumps, valves, pipes, wires and cables space and will consistently offer superior value proposition to its clients. Its customer centric initiatives, innovative products and excellent after-sales service make it the ultimate choice for customers worldwide. We take this opportunity to thank all our valued customers for their unwavering support in taking the brand to the number one position in the Pump market.”

The winners of the grand prize of Tata Nano car and Hero Passion Pro Bike are Mr.Mamidala Kiran Kumar, Telangana and Mr.Thimappa, Karnataka.